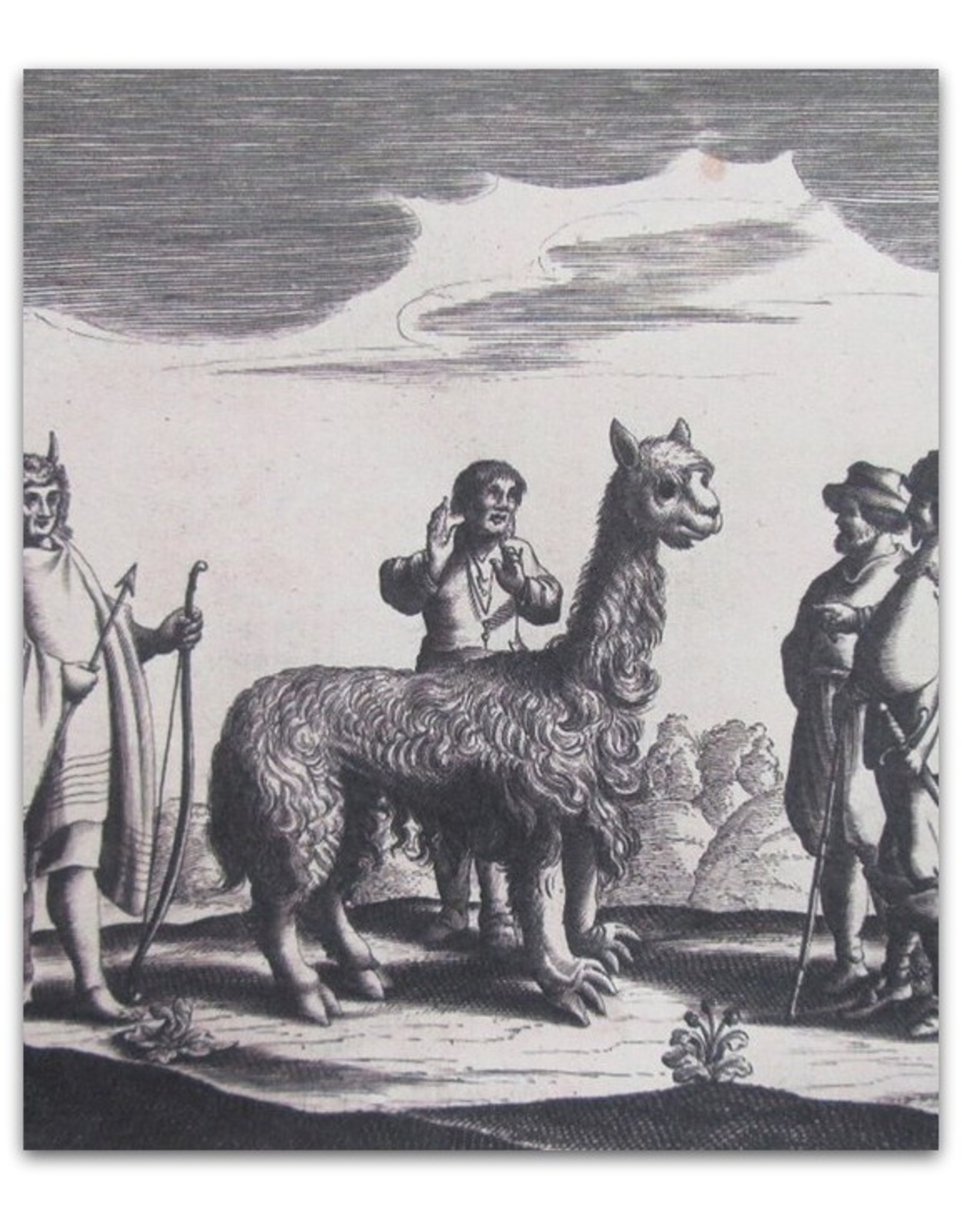 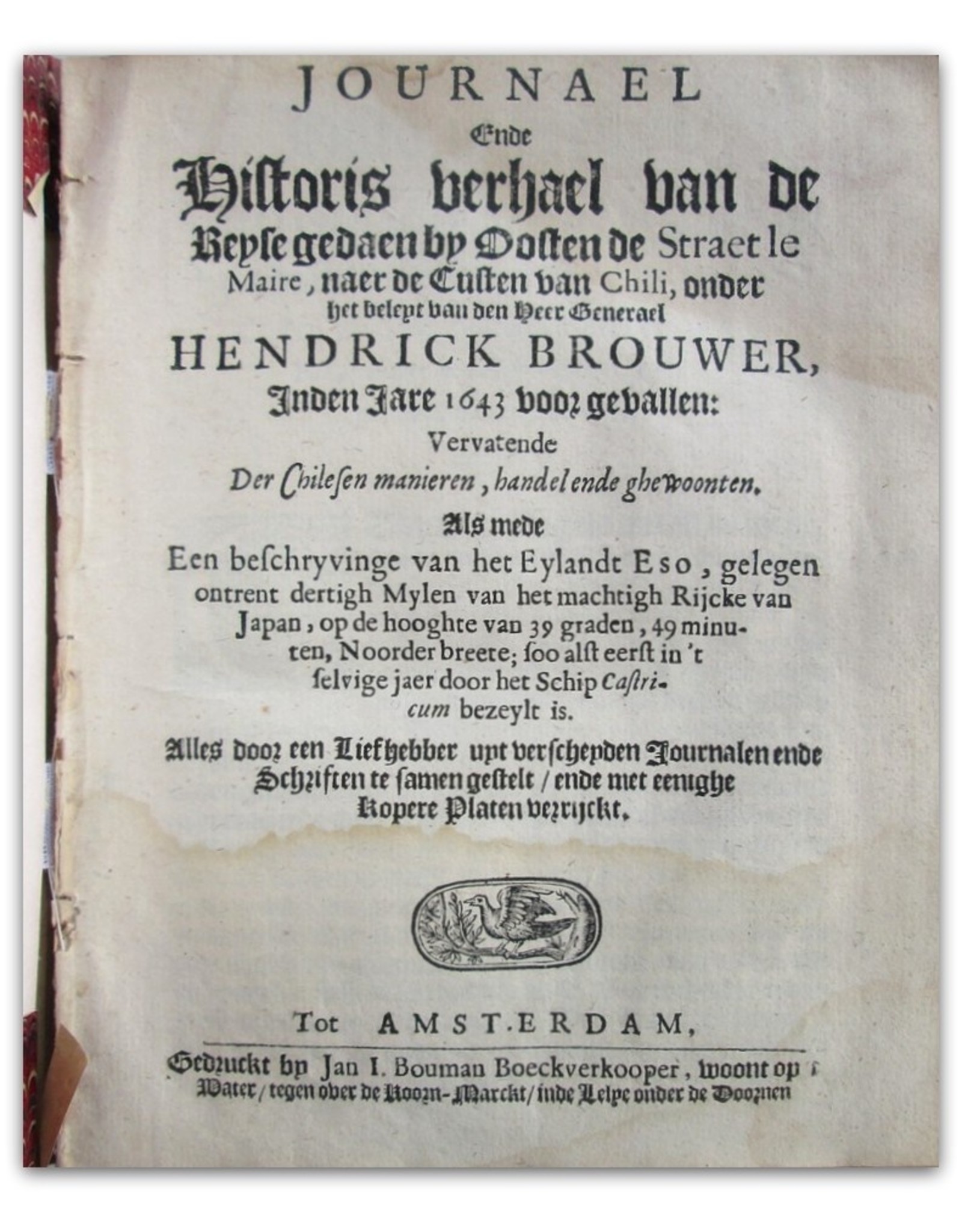 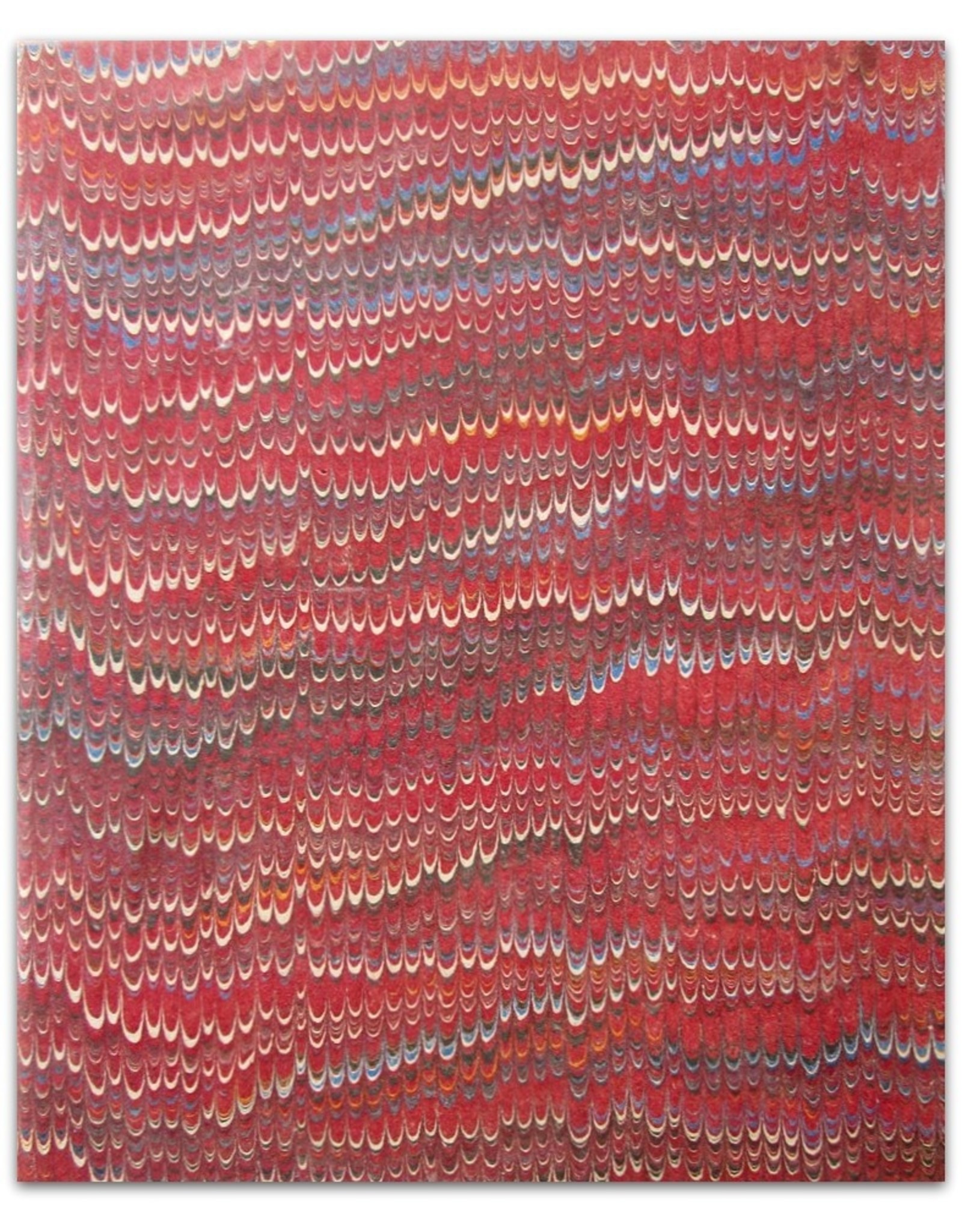 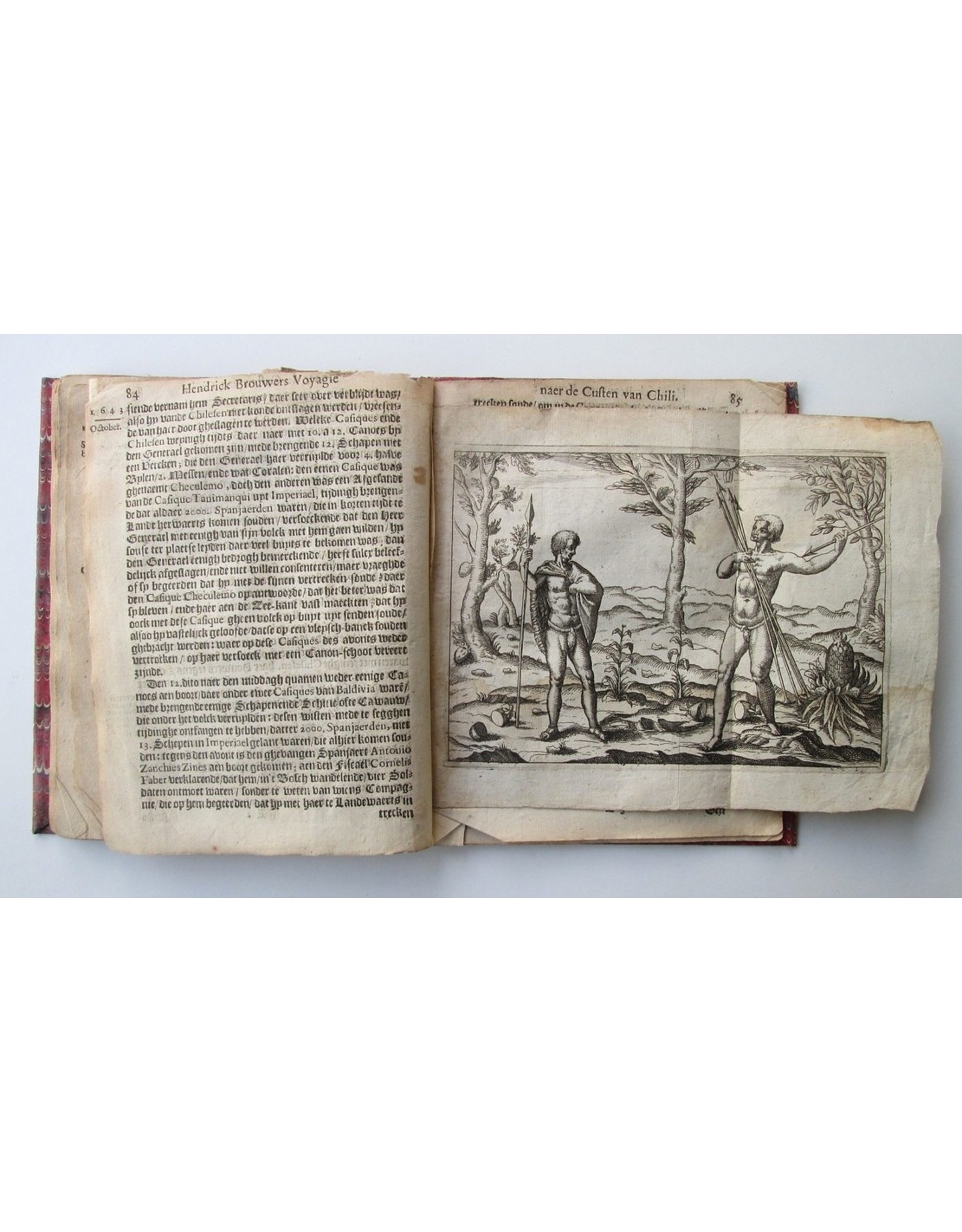 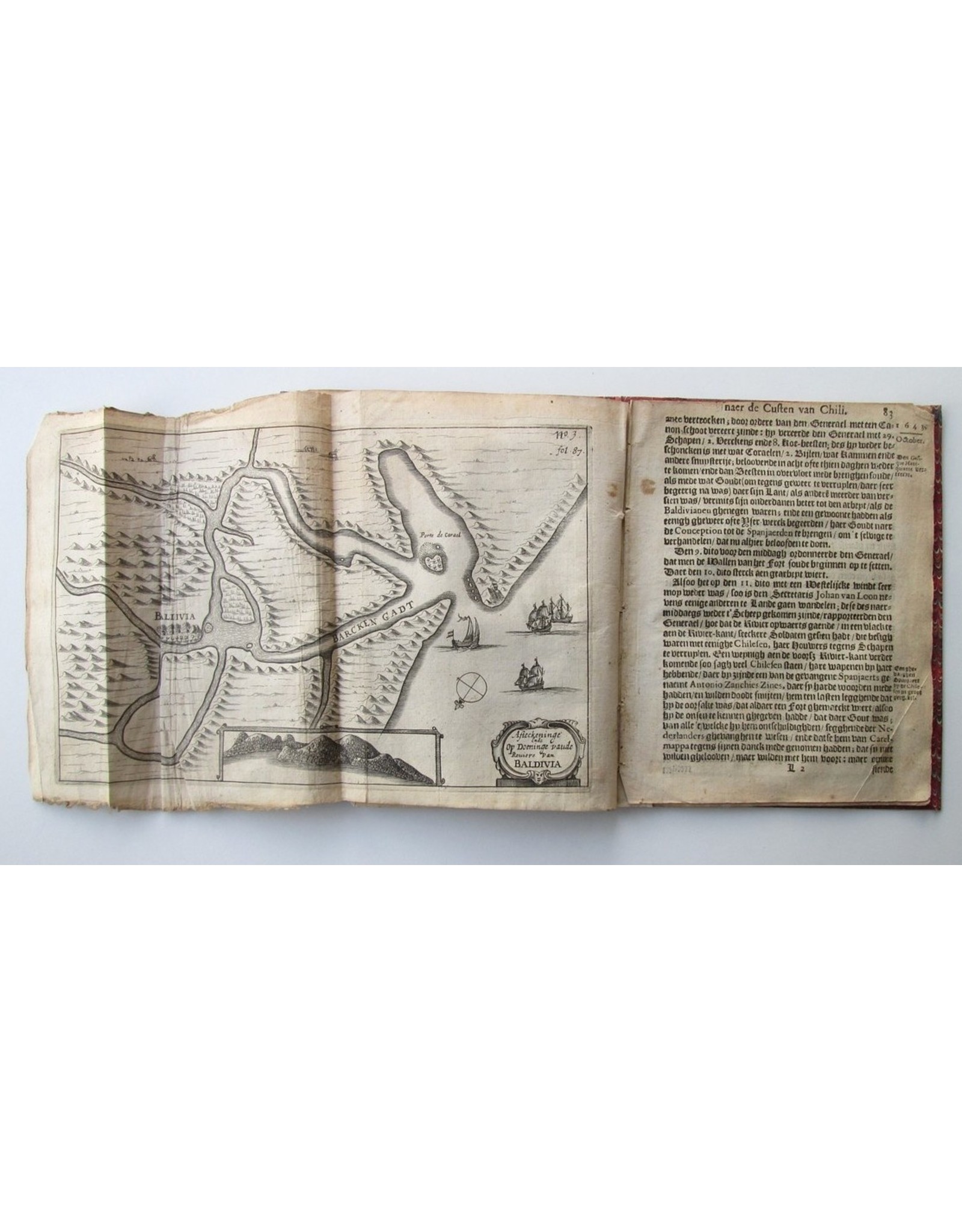 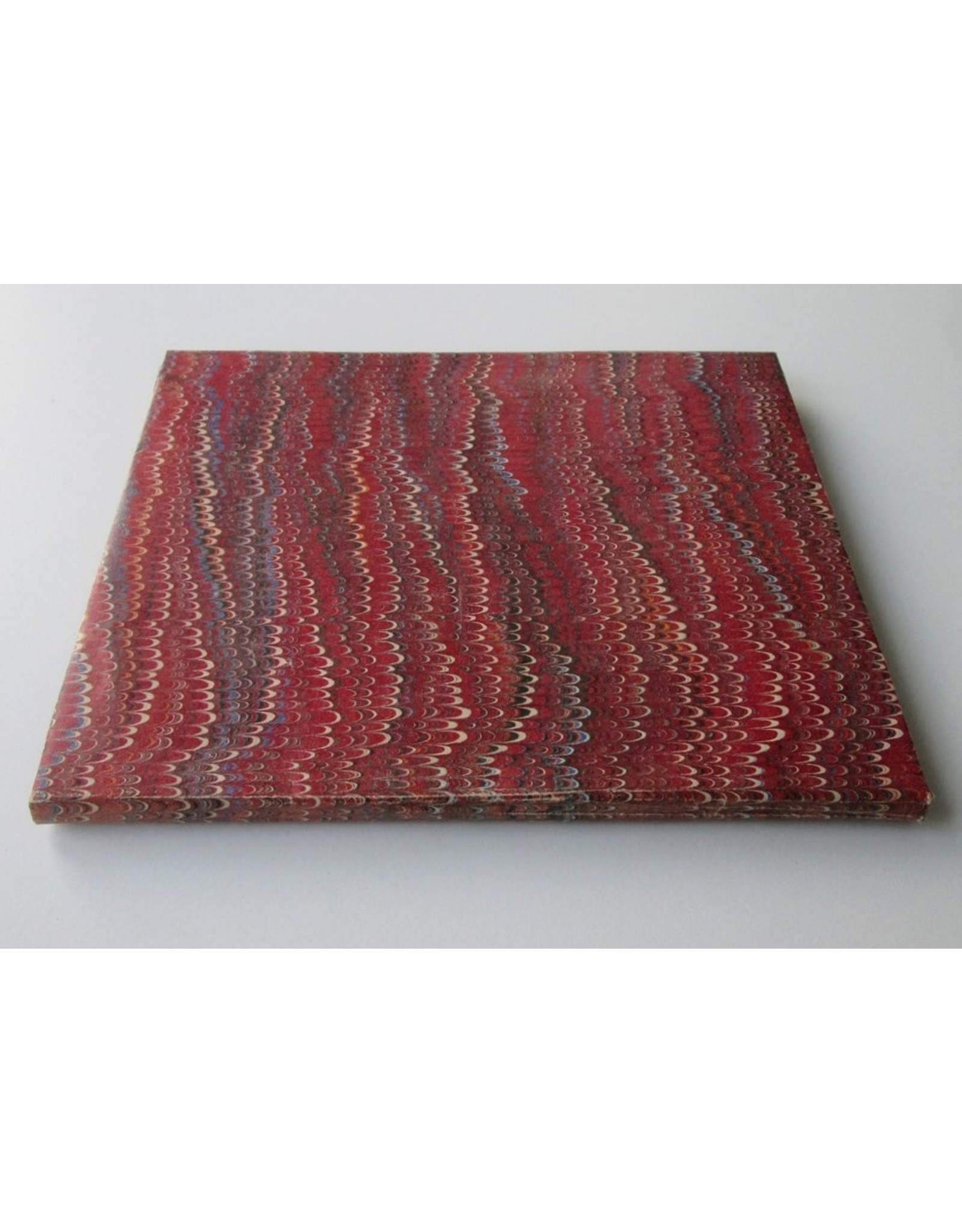 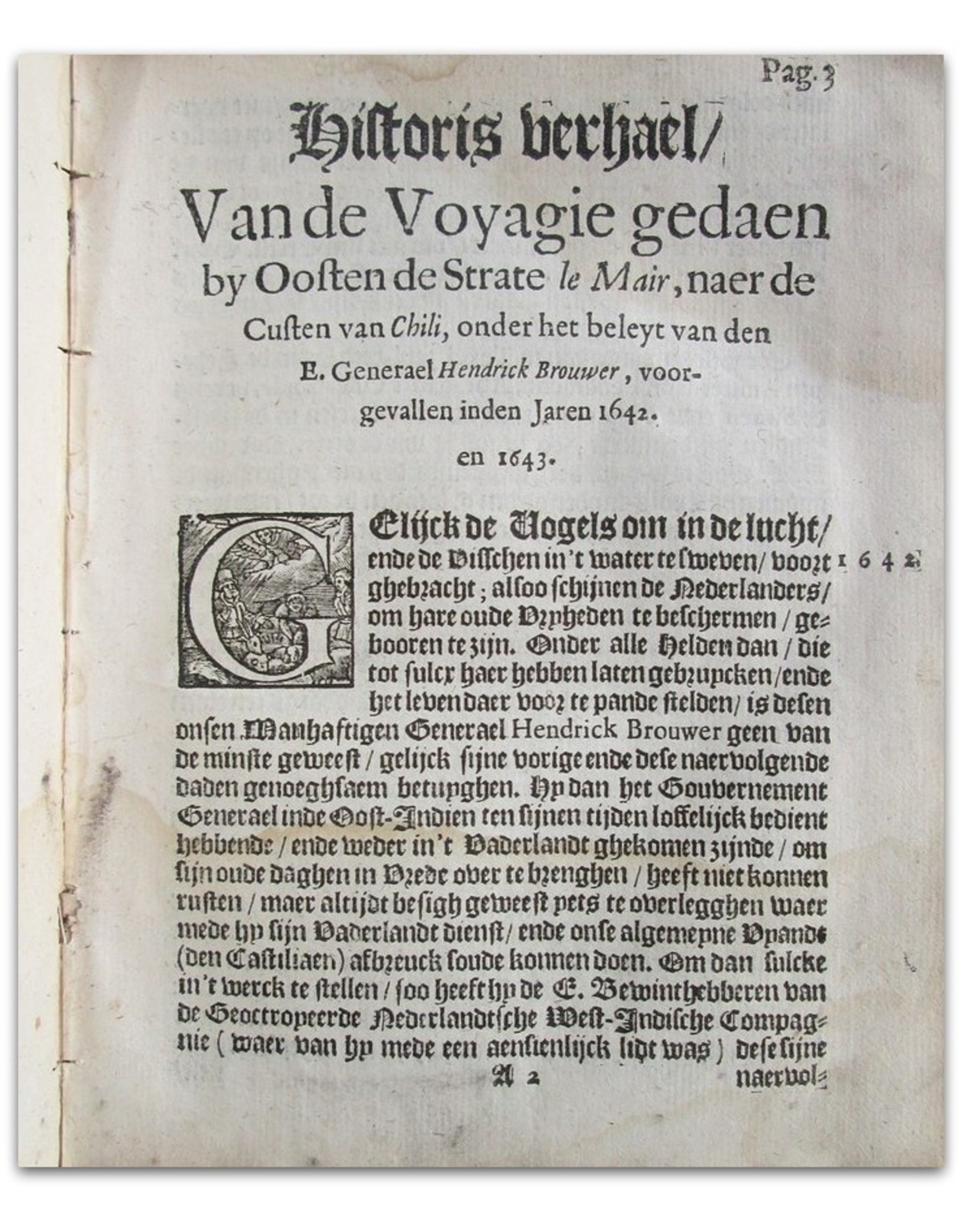 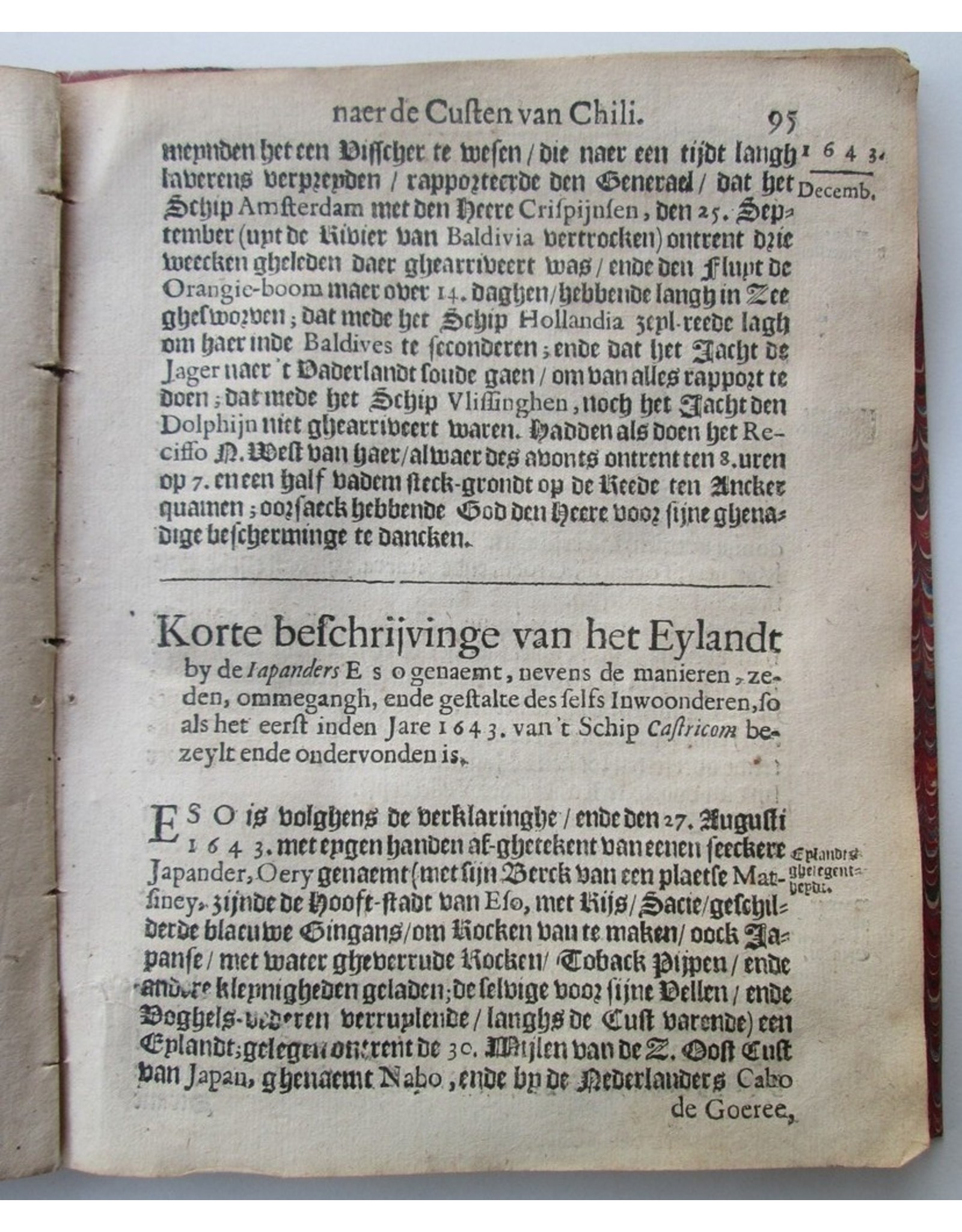 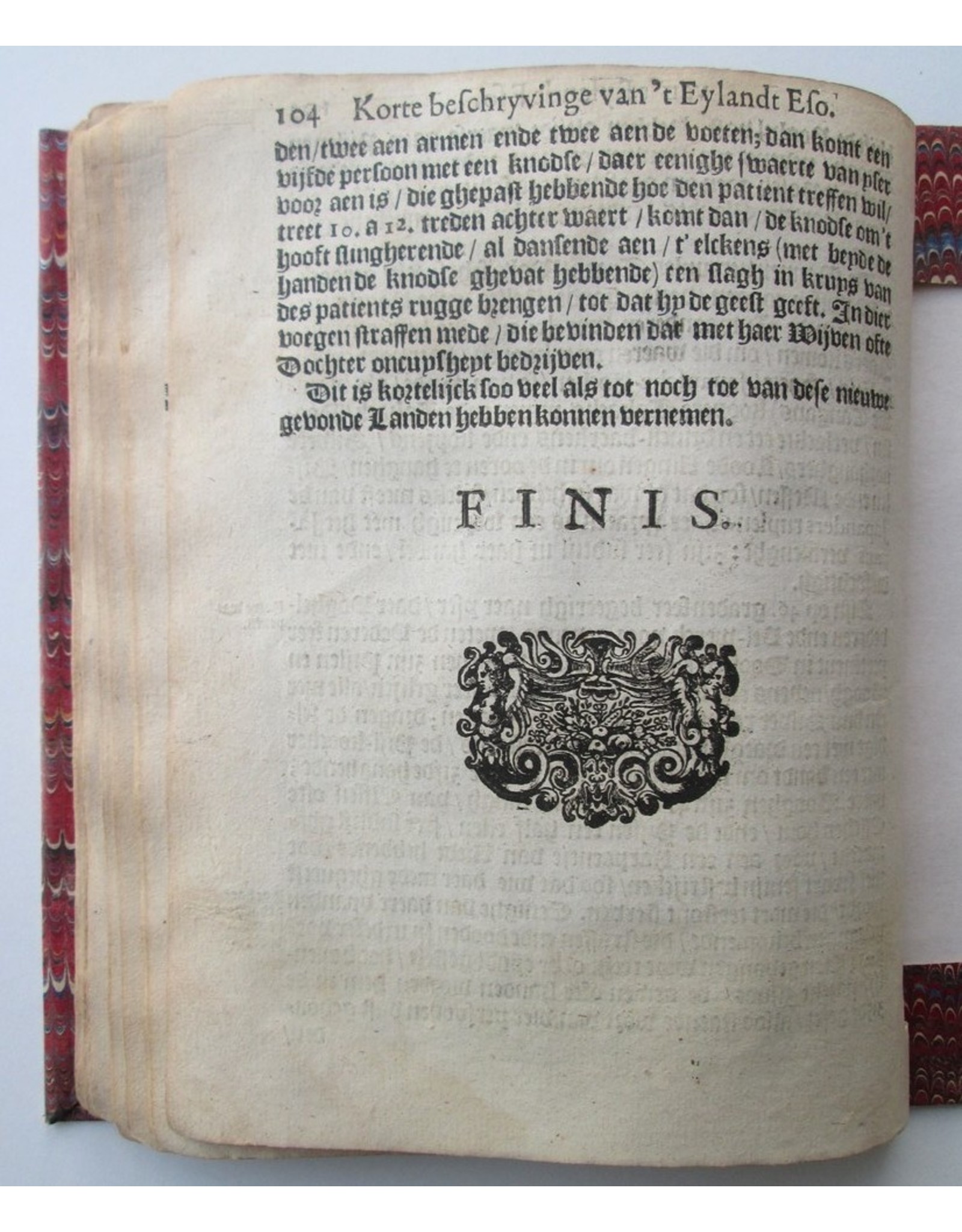 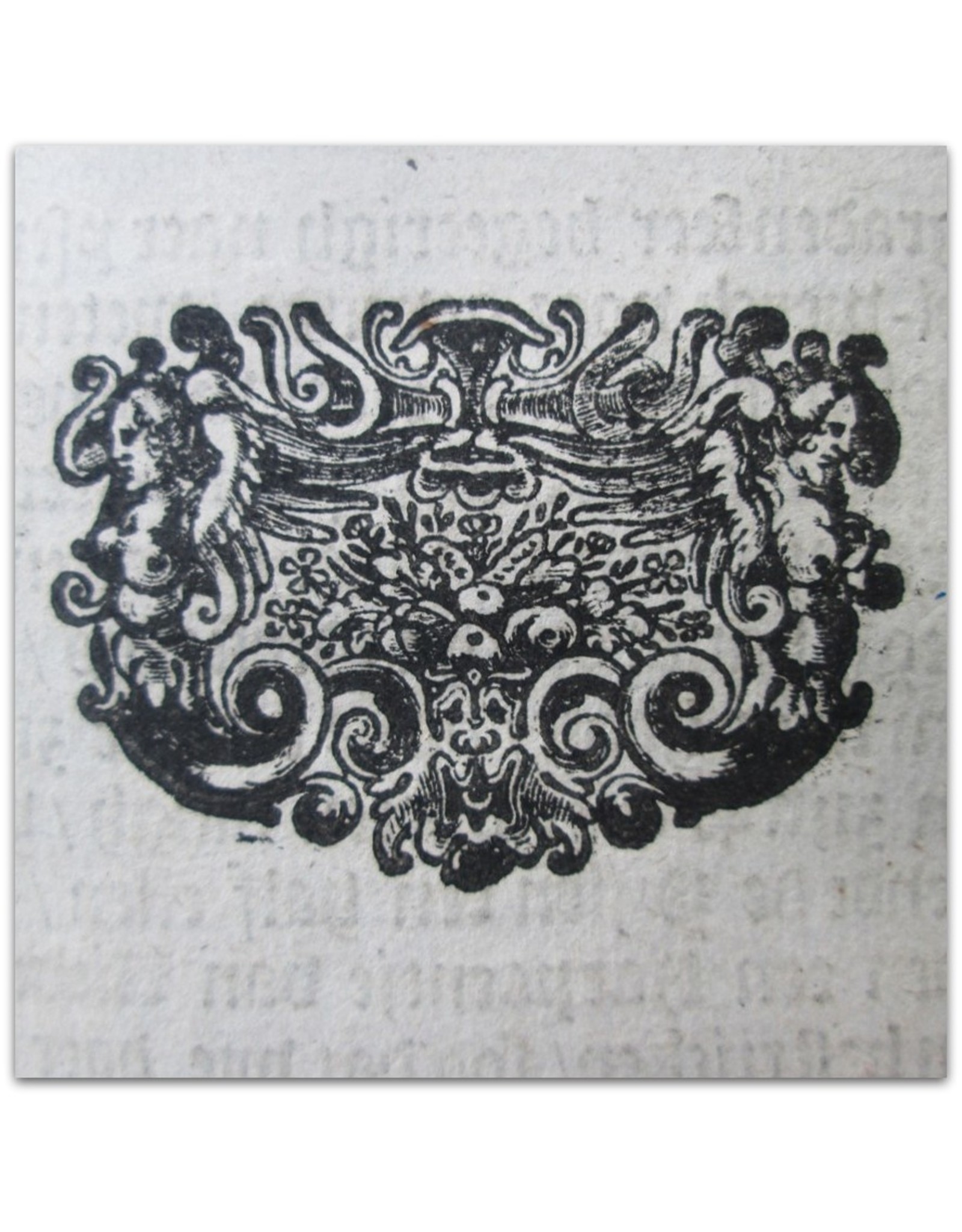 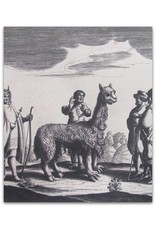 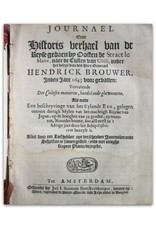 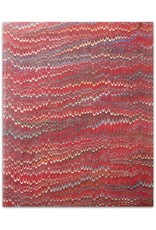 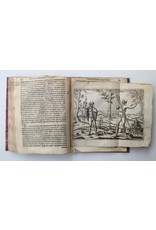 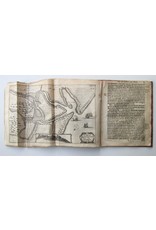 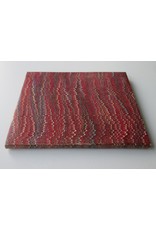 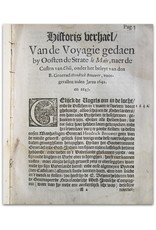 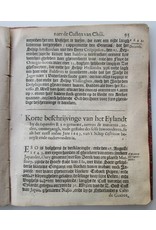 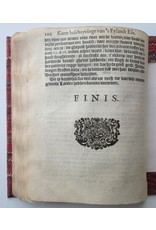 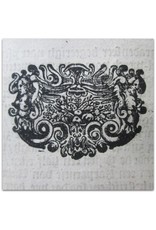 Antique travelogue from the 17th century with first description of a Lama ("Camel-Sheep") in Chile, South America and the island of Eso [= Hokkaido] in Japan. The booklet should contain 3 "Figuren" (namely 2 maps and 1 print) in copper engraving. Text in Dutch (a mix of Gothic and Roman font). Bound in a 19th century decorative paper cover.

ATTENTION: This copy contains only Figure No 3 (a fold-out map of Baldivia [= Valdivia]. The originals of Figure No 1 (the Lama) and No 2 (map of the coast of Chile) are MISSING but they are added in high resolution photocopy.

An extra original engraving with trees, fruits and two Indians with spears (20 x 16 cm) is interesting because it is unknown and not mentioned in bibliographies. The book closes with a tail-piece presenting a nautical motif (two "topless" figureheads), executed as a woodcut.

¶ Rare. Cf. Landwehr 372; NCC gives this edition twice in public collection; In 1646 a print was published by Broer Jansz, which Tiele 198 saw as the first edition. However, Howgego also dates this Bouman edition in 1646:

"Dutch navigator Henry Brewer (= Hendrik Brouwer, 1581-1643, one of the directors of the West India Company) died during this voyage and was succeeded by Elias Herckmans (1596-1644), who tried to team up with the Araucanian Indians to form an alliance against the Spanish. However, after Herckmans accidentally revealed something of the Dutch love for gold, the Indians regarded the Dutch as no better than their previous oppressors and Herckmans was forced to leave."

The account of the Japanese island of Eso is based on the findings of the Dutch VOC captain Maarten Gerritszoon de Vries (1589-1646), who in 1643 conducted research into the raw materials and minerals of the northern part of Japan. He discovered a strait (still called 'Proliv Friza' by the Russians) and Vries Island (O Shima, in Tokyo Bay). 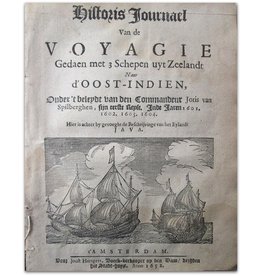 Rare 17th century edition of the log of one of the first VOC travels to the East with description of JAVA
Add to cart
Historis Journael van Joris van Spilbergen - 1652
€2.500,00 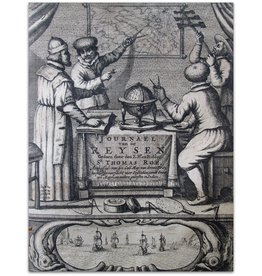 Dutch translation of the travelogue of the mission that Sir Thomas Roe carried out for the English East India Company to the emperor of the Mughal Empire.
Add to cart
Journael van den Ridder Sir Thomas Roe - 1656
€450,00